Sights Around the East End 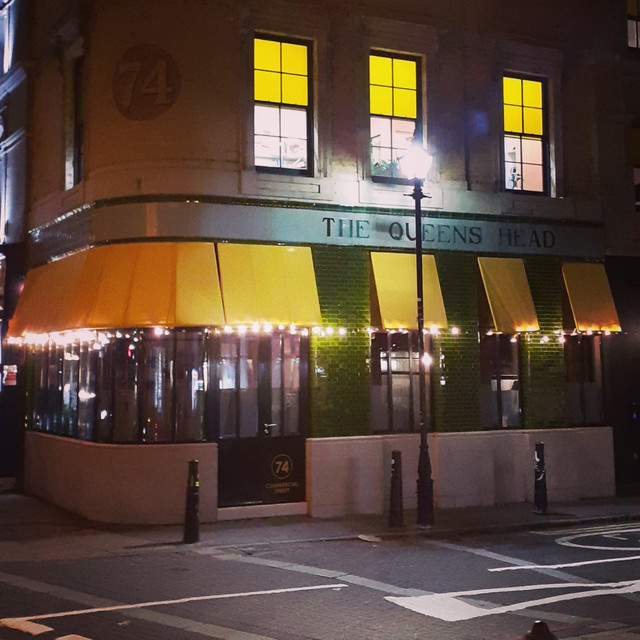 This is the old Queen's Head pub, on the junction of Fashion Street and Commercial Street in Spitalfields, but although the building is over 200 years old it hasn't actually been a pub since the 1920s. Now, it's a coffee shop, but still keeps the same tiling on the outside - it's been there since 1856. In the 1880s, however, this was one of the busiest and most notorious pubs within the Whitechapel slums. It stands only moments away from the spot where Jack the Ripper murdered Annie Chapman on Hanbury Street, and on the 9th of September 1888 a bizarre incident took place here.

The murder had only taken place the day before, and the excitement in the area was intense. The headlines were talking of nothing else, and crowds of sightseers were so dense upon Hanbury Street that police were forced to make frequent raids to clear them, as some living there were charging twopence a time to view the murder spot from their windows.

That afternoon a woman reported only as 'Mrs. Lyons' met a man on neighbouring Flower and Dean Street, who asked her to meet him for a drink at six o'clock, here at the Queen's Head. She then arrived to meet him as promised, but as they were talking in the bar she suddenly noticed that he was carrying a large knife in his right-hand trouser pocket. She drew another woman's attention to it, and the man turned towards her. "You are about the same style of woman as the one that's murdered", he said. "What do you know about it?", she asked. "You're beginning to smell a rat", he told her; "Foxes hunt geese, but they don't always find them."

With that, he rushed out through the door, and began to head north along Commercial Street. When he realised he was being followed he started to run, turned right into Church Street, and was gone. Whoever he was, he was never identified.. This is Mitre Square in Aldgate, City of London, and at 01:40am on the 30th of September 1888 Jack the Ripper murdered 46 year-old Catherine Eddowes here. The murder took place in the back-left corner, in front of where that white van is.

The next day, a 'poor woman' was interviewed for The Star newspaper, on the exact spot where I'm standing to take the photograph. "If the human devil that killed all these women isn't caught", she said "and soon, why, I might be next! It makes my blood run cold." 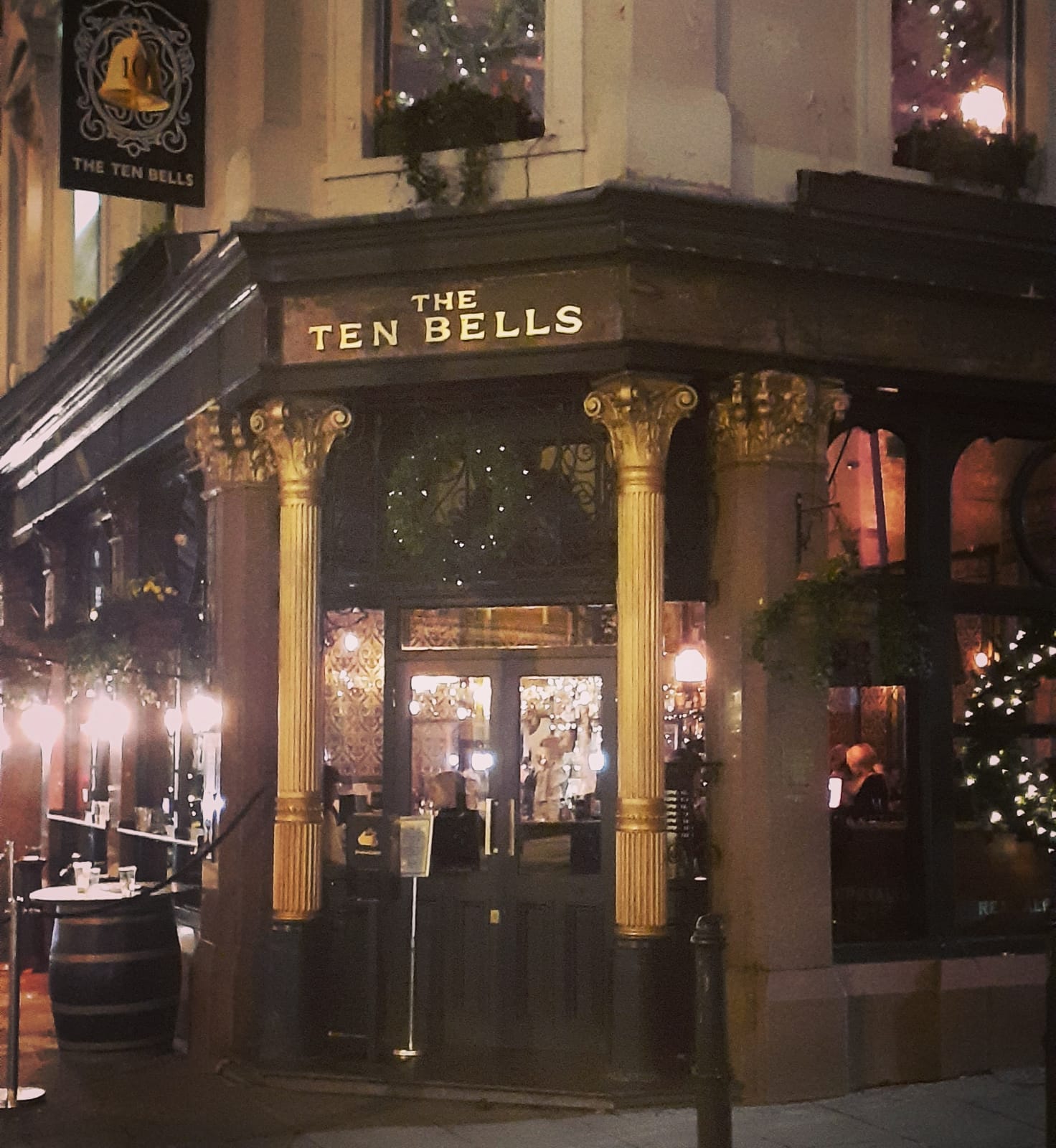 This is the Ten Bells pub in Spitalfields. Opened in the mid-1700s, it was originally known as the Eight Bells Ale House - with its name inspired by the towering Christ Church next door, or rather the bells that ring out from inside it. In 1788, new bells were installed at the church - ten of them - and so the pub was renamed to match. They then actually upgraded to twelve bells in 1836, and now only have eight, but the name, by then, had already stuck.

It stands on the corner of Commercial Street and Fournier Street - only moments away from where Jack the Ripper murdered Annie Chapman on Hanbury Street...and Annie, in fact, MIGHT have been last seen alive here.

On Saturday, the 8th of September 1888, the pub opened at 05:00am for the convenience of market traders setting up their stalls opposite. Landlord Edwin Waldron was working on the bar, when 'at a few minutes after five' a 'very shabbily dressed', 'middle-aged' woman entered, approached him, and ordered a drink. Many news outlets would later claim that she was Annie Chapman.

Suddenly, a man then arrived at the door and 'called her outside'. Waldron thought he seemed suspicious, but saw him only for a moment. Whoever he was, he wore 'a little skull cap', and was without a coat. "Annie" left and went with him, but was then found dead, and heavily mutilated, 45 minutes later; around a hundred metres or so behind the pub. Waldron was confident he would recognise the man again, but despite efforts to trace him, he was never found. In 1888, this was the gateway into Dutfield's Yard on Berner Street, Whitechapel, and on the 30th of September Jack the Ripper murdered 44 year-old Elizabeth Stride here.

To the right of the gates stood the International Working Men's Educational Society - a largely Jewish, Socialist club domiciled within a private house, with its kitchen door leading out into the yard. To the left stood two small houses, then The Nelson pub on the corner, at number 46. There, the street was crossed from east to west by Fairclough Street.

Midnight passed, and across Whitechapel the pubs were closing, but the area was deserted on account of the miserable weather. Gas lamps glowed dimly along the main streets, but with the sun gone Dutfield's Yard was 'as dark as Erebus'. The ground was thick with mud.

At 01:00am, 26 year-old Louis Diemschutz arrived with his pony and cart, having spent the day working on the markets in Crystal Palace. On passing through the gates in the darkness, however, the pony stopped, shied to the left, and 'refused to go near the right-hand wall'. He stepped down from the cart, lit a match, and discovered Elizabeth Stride in a pool of blood.

She was dressed entirely in black, and lay on her back nine feet from the gates; on the right-hand side, with her feet towards the photograph and her eyes wide open. The killer had kneeled by her right side, and cut her throat violently from left to right - partially severing her left carotid artery and dividing her spinal column, but she hadn't died immediately. It would have been 'impossible' to move after such an injury was inflicted, Police Surgeon George Phillips would state, but she had 'bled to death, comparatively slowly'.

The killer removed her hat, placed it beside her, and scattered a packet of breath mints around her body. He placed what was left of the packet into her left hand, then smeared blood across her right hand and forearm. He placed it across her chest, then ran - leaving Elizabeth to die in the mud on the yard floor. She was lying the same way that Annie Chapman had been. 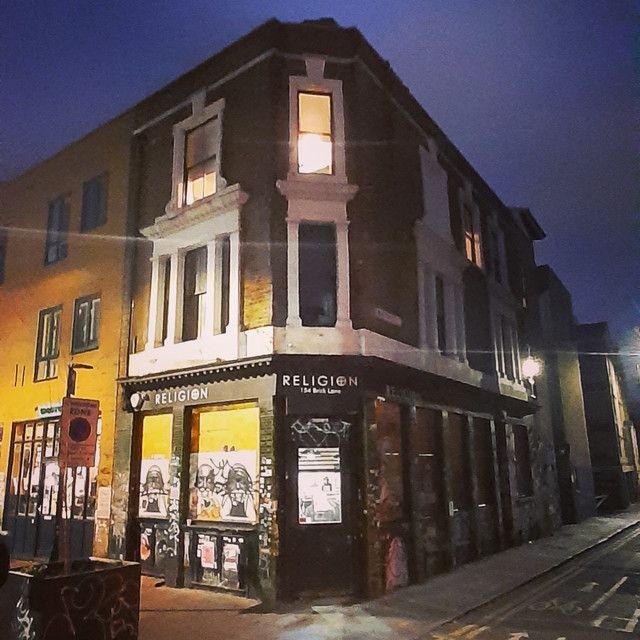 This is number 154 Brick Lane here in Whitechapel and, now, it's a clothes shop. The building, however, is Victorian, and in 1888 it used to be the Two Brewers' Pub. It's in this building, on the 6th of August 1888, that 39 year-old Jack the Ripper victim Martha Tabram was last seen drinking on the night she died.

She was at the pub that night with her friend Mary Ann Connelly, 50, and two soldiers that the pair had met inside. Whoever the soldiers were, they would never be identified, but it wasn't until hours later that Martha was discovered, stabbed 39 times and with her body posed, in a lodging house building on George Yard (now Gunthorpe Street). Whatever happened to her in the meantime would remain a mystery.

Likewise, whoever committed the crime was never arrested, but the murder of Martha Tabram would be regarded by investigators as the first of the "Jack the Ripper" series. A vigilance committee was quickly formed at Toynbee Hall on Commercial Street to assist police in their hunt for the killer, but it would be three weeks before he would appear again. This is the rear of the Victorian Bath and Wash House building on Old Castle Street (formerly Castle Alley) here in Whitechapel, and at 12:40am on the 17th of July, 1889, Jack the Ripper murdered 39 year-old Alice MacKenzie here.

She was found by 31 year-old Metropolitan PC Walter Andrews, of Whitechapel's H Division, as he had been making his way to Whitechapel High Street in the dark - with her head towards the kerb, her feet towards the wall, and directly beneath a gas lamp, which stood in the middle of this photograph. Her throat had been cut violently in two places, leaving knife injuries along her jawbone, and she was lying in a large pool of blood - with her head turned sharply to the right, her eyes wide open, and her legs wide apart.

The killer had pulled her clothes chest-high, stabbed her in the left side of her chest, and cut a seven-inch injury into her abdomen. He left scratch marks across her stomach with his fingernails, and bruising that would lead Dr. George Phillips, of the Metropolitan Police, to state that he had grabbed her skin between his fingers, and 'pulled it out for at least three inches'. He placed her hand across her chest, smeared her blood across her stomach, and then ran. She was lying the same way that Annie Chapman, Elizabeth Stride and Mary Kelly had been, and he was extremely lucky that nobody saw him.

News of a new 'Ripper' murder spread quickly, caused a sensation in the area, and large crowds of sightseers arrived the following day to the irritation of many locals. Alice's funeral attracted enormous crowds, to such a degree that police were forced to clear a path through the thousands blocking numerous streets in Spitalfields, for the procession to make its way to the City of London cemetery in Plaistow. Built in 1886, this is the doorway of 108-119 Wentworth Dwellings on Goulston Street, here in Spitalfields, and there's a story to it.

In the early hours of Saturday, the 30th of September 1888 Jack the Ripper committed two murders - around 50 minutes and 2/3 of a mile apart, and in two separate police jurisdictions. The body of 44 year-old Elizabeth Stride was discovered first, at just after 01:00am on nearby Berner Street, before 46 year-old Catherine Eddowes was then discovered, with her throat cut deeply, at 01:44; a 12-minute walk west inside the City of London, in Mitre Square.

Catherine had been heavily mutilated, with a deep, jagged knife wound running the full length of her torso and puncturing numerous internal organs. The killer had pulled her intestines from inside her, and stuffed them into her throat wound. He removed a two-foot section of her colon and placed it by her side, then mutilated her face; dividing both sets of her eyelids, and severing parts of her nose and left ear. He then cut out her uterus and left kidney, and would appear to have taken them with him. 'Almost half' of a white apron she had been wearing had also been cut away, and was similarly missing.

It was then found, however, only 70 minutes later, at 02:55. It had been dumped in this doorway, only moments from the square, 'a few yards' into the right hand-side. It was smeared with blood stains and faecal matter, and on the wall above it was a message written in chalk - "The Juwes", it said, "will not be blamed for nothing."

Metropolitan Police Commissioner Sir Charles Warren was quickly informed by telegram, and arrived personally at the scene. With such widespread antisemitism in the area, he feared that the inflammatory message would 'cause a riot' when seen, and so he ordered it washed from the wall before a photographer could arrive to document it. The move was seen as an enormous blunder, and led, in part, to his resignation from the police force six weeks later.

Never before had the killer left such a clue, and he would never do it again.